Corruption is bad. Corruption in Indonesia is really bad. That’s why Freelancer and Merdeka held a hackathon to come up with solutions to tackle this growing epidemic that is plaguing Indonesia and most of Asia.

I found out about this hackathon from the Hackathons Australia Facebook group but it wasn’t until my friend Ivan asked me to attend since his friend Pasha was organising the event. I decided to team up with Ivan and got introduced to his friend Jeff for the hack. Both Ivan and Jeff are quite experienced with startups and pitching so it was a pretty sweet deal for me; code and let them pitch. 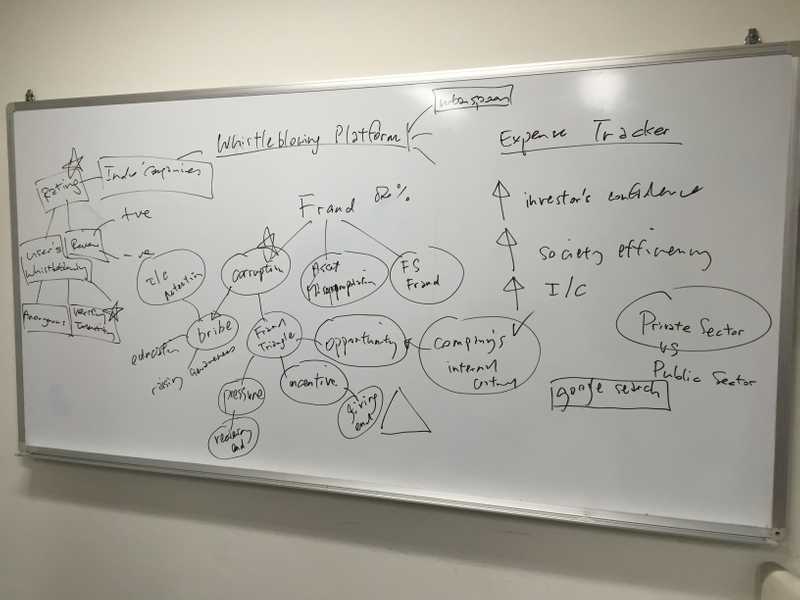 For this hackathon, we decided to be tryhards so we met up on the night before the event to eat burritos, plan and setup the development environment. We were lucky enough to get Ronald, who used to be a fraud investigator at EY Hong Kong to give us lecture on fraud and corruption. Jeff then suggested we go to an Indonesian restaurant to interview some Indonesian people and try to get some thoughts and opinions on corruption in Indonesia. We gain lots of insight and had some pretty interesting conversations with the diners at the restaurant. I had some lamb satay skewers and iced jasmine tea. It was nice.

We then headed back to Fishburners and brainstormed some ideas and decided on our development environment and stack.

We arrived at Freelancer headquarters, ready to hack for 24 hours with our laptops, chargers and McNuggets. We settled under the disco balls and started hacking. Disco, disco…

The organisers were super nice dudes that stopped at nothing to provide us with an awesome experience overall. The food provided at this hackathon was by far my favourite so far. On the first day there was pizza for the lunch, an Indonesian feast for the dinner, McDonalds and icecream for the midnight snack. It was amazing.

What we ended up building for this hackathon was essentially a social media botnet called #nokuropsi. The idea behind this solution was to artificially create a online social movement against corruption by allowing users to sign up and connect their Facebook, Instagram and Twitter accounts so that went someone reports an incident of corruption, everyone would share/tweet about it. Ultimately creating a hashtag trend.

This solution is not something that intends to solve corruption in Indonesia overnight but it hopes to raise awareness of the problem and force the media and people in positions of power to acknowledge the issues at hand. 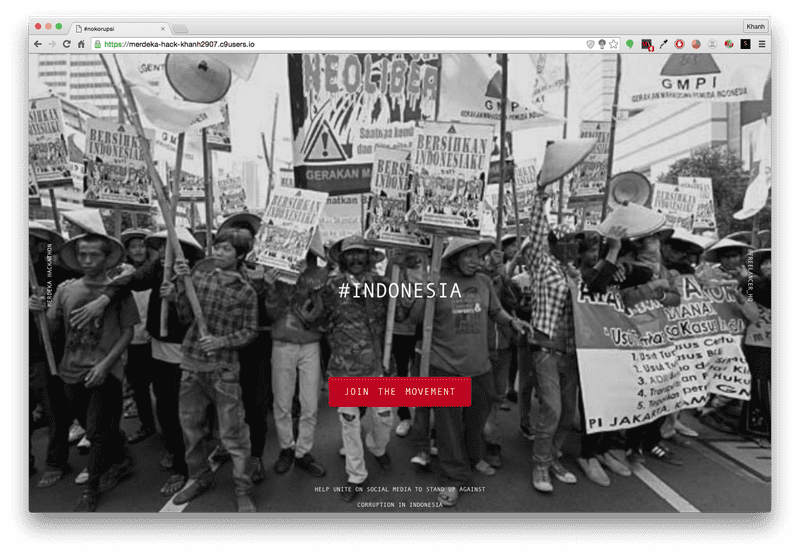 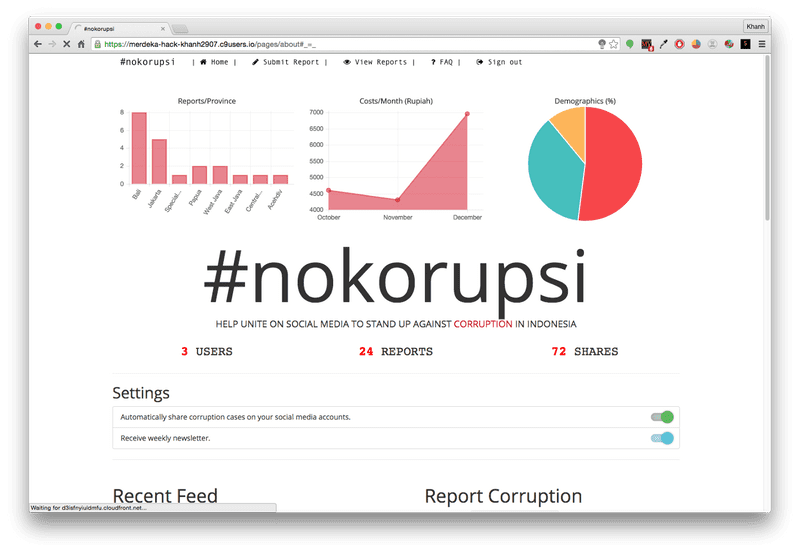 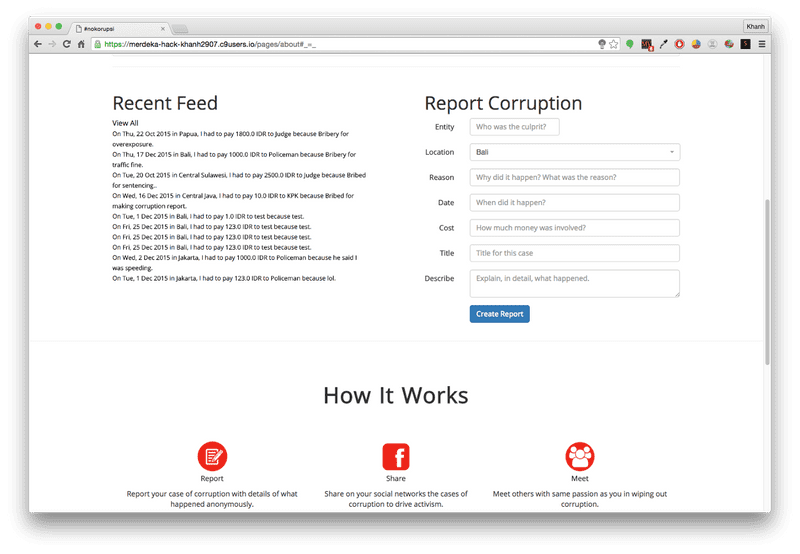 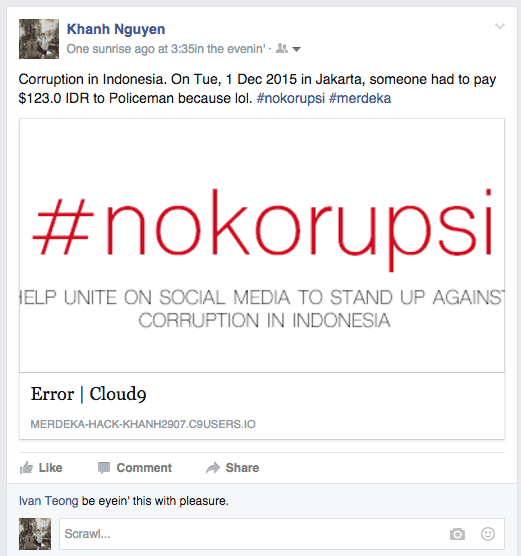 This application was built with Ruby on Rails on Cloud9 which was a great for collaborating with my team mates. I didn’t need to waste any time with merging or dealing with conflicts, it also handled the deployment. 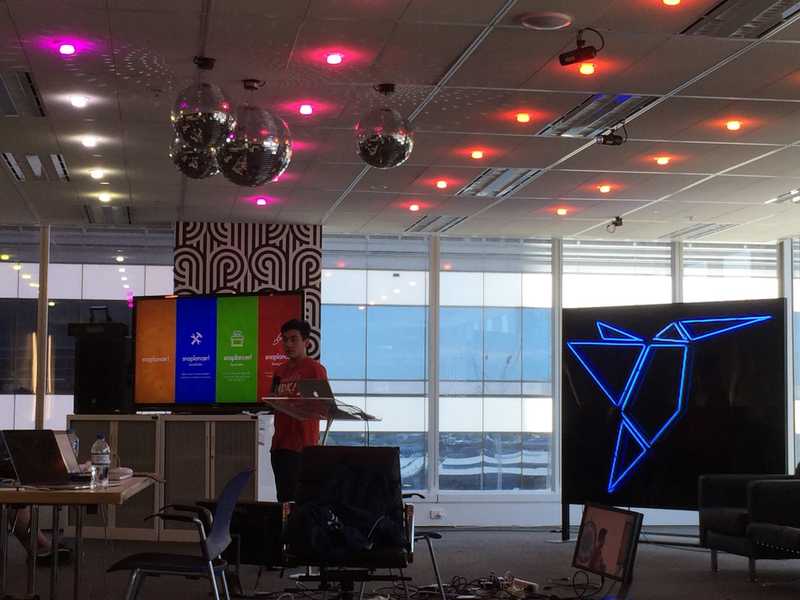 I was expecting that both of my teammates would handle the pitching so I didn’t think about it too much. It wasn’t until an hour before the pitches started, that they mentioned that we should all pitch… I freaked out. However, Pasha the PM and organiser from Freelancer was kind enough to give a workshop on pitching before the pitches which was extremely useful since I totally suck at social things.

Ivan and Jeff wanted to practice and prepare for the pitch at the last minute, but I was too lazy and was suffering from a massive headache from a lack of sleep and/or a hangover. When it was finally time to pitch in front of the cameras and all the attendees, I ended up talking for the most of it with the microphone in my shaking hands. My words were all full of verbal typos and the audience laughed (at me) quite a bit. It was scary but it was also quite a fun experience. 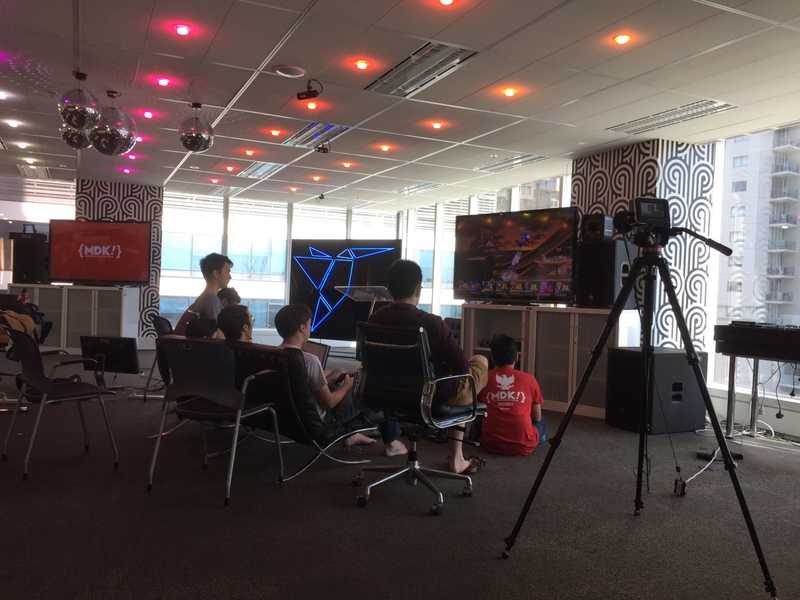 After the pitches, I went around and added everyone on Facebook while waiting for the Freelancer dudes to give out the prizes. The first year UNSW kids, the Freelancer intern and my group got $50 JB HIFI gift cards for hacking overnight.

Lots of people stayed back and played Super Smash Bros. on the Wii U.