Ever needed help making tough decisions amongst your team?

Who's doing support rotation this week?

Who's doing the coffee run today?

I don't want to take that bug, you do it!

Someone... PLEASE... get the builds greeeeen!

Just play some rock-paper-scissors with /rps!

Challenge a teammate to a game of rock-paper-scissors with /rps @mention and this thing will pop up in your chat:

After you have finished drawing up your battle plans, just click on your weapon of choice and watch it play out. 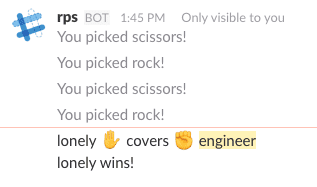 Note 1: only you and the challenged user can play.

Note 2: the game will keep going until there's a winner.

You can also play secret games in direct message channels with /rps.

Try /rpsls for a more advanced version of the game with more lizards and Spock, son of Sarek.

But hey lonely engineer, that's a snake! Not a lizard!

We only store unidentifiable ID strings and numbers provided by the Slack APIs so don't sweat it.

That's what I original had here but Slack asked for a bit more detail.

You might have noticed the bright scary yellow warning saying that this app will have access to your users' information. But don't fret! This app not and will not store any personal information besides for a unique, random id for each team and users that have pending games. It looks likes "U4XXYEXHX". We need this to figure out who you're playing the game with and who to register the moves to.

The user:read scope is required for us to look up the name of the person you mentioned to find their id so that we don't need to refer to them as their user name. The results of this query of the Slack API is not logged or stored anywhere.

The messages invoking the slash commands will not be recorded in any form of persistent storage, databases or logs.

The app is actually on budget mode and does not even store information of the games after they have been played.

rock-paper-scissors does not listen into your conversations and will only reply to the slash commands '/rps' or '/rpsls'.

I can't really say I invented rock-paper-scissors but who can say they did?!

We do not use cookies. I'm not sure how that would even be possible. 🍪

None of that stuff.

You'll just have to email me at this.should.forward@gmail.com and will probably have to beat me at a game of rps.

This was a project that was coded up in a weekend whilst I was researching ecosystems and API documentation. So it's quite bare bones at the moment. Feel free to reach out if you've got any feedback or problems and I'll try my best to get back to you. 😗